The gastrointestinal tract is an organ system within humans and other animals which takes in food, digests it to extract and absorb energy and nutrients and expels the remaining waste as feces. – It is a perfectly described never-ending circle of everything that people feel and do.
Upcoming performance concentrates on uniformity and monotony, it's formation and development. It analyze and questions the very meaning of a great desire to live the way other lives. The taboo for otherness, in the last century, while Lithuania was occupied, has become the greatest trend of this century.
Creating bright yet boring shots of our lives - household, holidays, communication, self-care and improvement: how we eat, reduce the amount of hair in the eyebrows, think of others, wait for us to bend, and so on. It leads to the aim to create a strange, deep, visual comedy/melodrama, which will be constructed fragmentary, letting the audience not to emphasize as the theatre usually offers, but to consciously put a focus on the meanings constructed on the stage.
A story is made for young adults and it consists of three to four actors. The narrative is told in dozens of montage-bound scenes that speak of human vanity and a sense of fullness in it.
“What’s next?” – the author and director of the performance asks. And answers: “There is no answer”. And this contradiction is a starting point of the performance.
-----
The basis of this performance and the concept of the play specially written for it were the theater principles of the famous French theater master Antonin Artaud (1896-1948), his creative method and his first play "Splashes of Blood" (French: "Jet de Sang"). The author's play, which has never been staged in Lithuania, presents a fantastic course of events in the creation and destruction (self-destruction) of man and the world. Director Naubert Jasinskas transfers all this to these times, while transforming A. Artaud's method with modern theater techniques. "bowel" characters try to escape from the monotony of life, and at the same time - to live with it. Two women and two men clarify existential problems through mutual relationships - how to accept yourself and your needs? The performance, which we will see live after the end of the quarantine, analyzes the interaction between identity and the everyday influences that shape it.
-----
Modern communication standards are our new culture. Like every aspiration, ideal, it becomes a virtual reality - the one in which we would like to live, but it is a little fake. In order to meet it, we become a little fake ourselves. Like the characters from The Sims game, we program ourselves for some social role, learn the phrases needed in a certain environment, the appropriate reactions, perform the programmed functions and little by little forget who we really are.
"Bowel" is a play about the cultural codes that surround us now. The play features four characters of different generations - older and younger couples. And their codes are slightly different, but they're all like the Sims, stuck in repetitive, programmed roles.
It was not easy for the actors to find a way to robotize their roles and at the same time psychologically justify each of their behavior. The work of the actors in this performance is one of the most interesting components of the performance - will we recognize ourselves in the role codes they discovered?
Which car washing program would you choose: 1) super-wash; 2) sexy car wash; 3) just a regular-boring simple car wash? Let me guess... 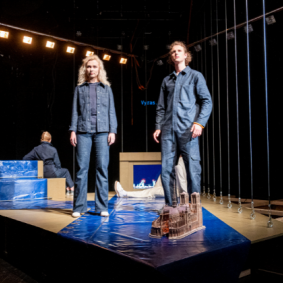 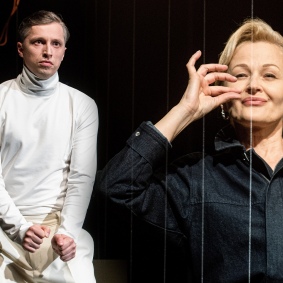 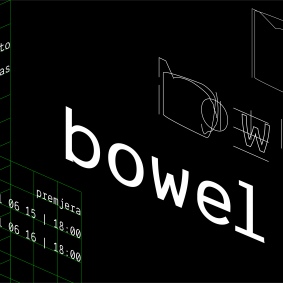 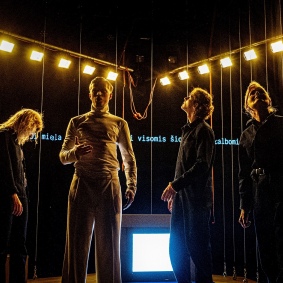 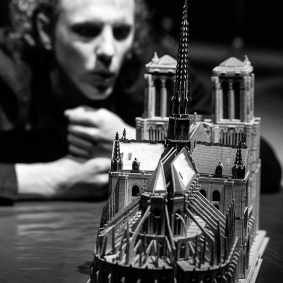 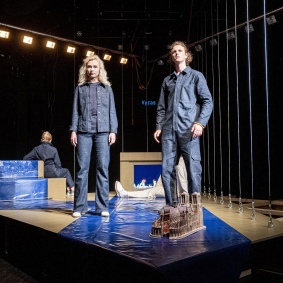 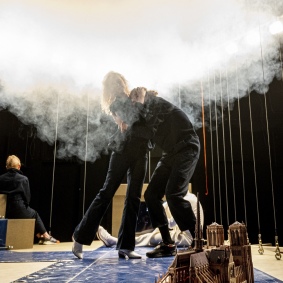 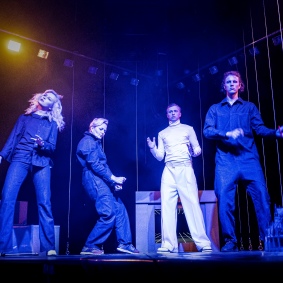