Cosmological opera “S’Anatomia” is a contemporary opera created with the guidelines of visual theatre methodology. Creators inspired by paintings and compositions of one of the most famous Lithuanian artists Mikalojus Konstantinas Čiurlionis (the composer was awarded for M. K. Čiurlionis scholarship) will welcome participants to experience a guided sound meditation. Music is composed based on drone music which will become a metaphor of cosmological object movement.
Responding to the most relevant musical trends, the composer seeks to combine archaism with innovative musical and philosophical archetypes. “S'Anatomia is a cosmological opera experienced as a musical performance with two players and a fantastic drummer sitting together on cushions in a tent with only twenty other spectators. The almost hypnotic music is about the big picture, but then, with a simple noise drum full of sand, gentle Baltic Sea waves can be heard for minutes, which audibly transport the cosmos to Lithuania”, - German critic Thomas Irman writes.
Contemporary visual theater consistently struggles with the hierarchical primacy of literature over image and music in theatrical work. The 21st-century visual theater is increasingly rethinking itself in search of a different foundation and creative inspiration than literature or drama.
This opera continues the creative quest of “Kosmos Theatre” (producer Darius Vizbaras) in creating and developing an original Lithuanian visual theater by basing the theatrical action on non-psychological dramaturgy of character relationships, and by prioritizing music and sound design, developing the concept of audio-visual plotting as an inseparable unit as a basis of the performance.
The creation of the piece is covered by the Vasario 16th Foundation and the Čiurlionis Society. The composer of the play, Mantvydas Pranulis, has been nominated for the Golden Stage Cross as one of the most significant works of 2021 for the creation of the experiential contemporary opera "S'Anatomia".

Availability:
The show is accessible to the blind and partially sighted. 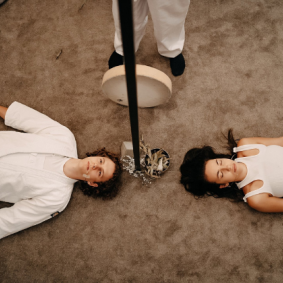